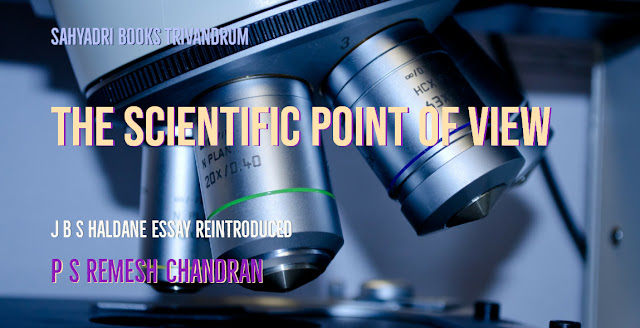 Scientific point of view is God’s eye-view. A good scientist, like God, will view and examine things impartially and truthfully, and will not have emotional considerations and pass judgments.


Science influences the average man in two ways- its practical applications are useful to man and it affects his opinions also. One of science’s main contributions to common man was its presenting man with a scientific point of view. Science continuously tells us we should give up smoking and consumption of liquor, and adopt walking and swimming daily activities to remain healthy. Once we viewed these warnings skeptically, but we now have begun to understand that there is sense and logic in these warnings. That is science’s contribution, creating this awareness and consciousness of health. The average man is attracted by the emotional and ethical aspects of a problem, not by the facts, whereas a scientist considers only the facts. A scientific point of view places everything and everyone on the same emotional level which is impartial and truthful. Because of this equalization in emotional levels, scientific point of view can be called the God’s eye-view. A good scientist will, like God, view and examine things impartially and truthfully, and will not have emotional considerations and pass judgments. Even though the enemies of science wish science to do both, and abuse scientists for being deaf to moral considerations, a scientist will remain such impartial that Mr. John, Mr. Chang, Mr. Smith, the Tape Worm and the Solar System will be equal to him. A scientific point of view enables people also to adopt the same view of an impartial scientist, in analyzing things of importance to him.

When Negros enjoyed friendship of whites during the American Civil War, the new Democratic Negro became a heavy drinker and died in thousands, more in numbers than were killed in the actual war.

Haldane is of the opinion that the Negro problem, i.e., the problem of Negros becoming a problem for the whites, and the problem of diseases can be solved by adopting scientific point of view. He uses these two examples to illustrate that adopting scientific point of view in solving social, human problems is feasible and useful. Though there have of course been strong oppositions to his this point of view, let us examine his observations on the living conditions of Negros in America, most of which are things of past in America now. Negros was considered inferior to white men. In the Southern states of America where slavery existed, the Negros were pulled out of cars and driven to cotton plantations to work hard in harsh sun light. Openness to nature favoured them and there they prospered and multiplied, creating thus the so-called Negro problem for whites. But had they been extended consideration and fellowship, they would have become softened and died of American diseases. This is the question J B S Haldane rises- whether emotional or scientific attitude is to be adopted in solving social, human problems, which is beneficial and useful? During the American Civil War, the Negros enjoyed friendship of the whites, as a result of which the new democratic Negro became a heavy drinker and died in thousands. The number of Negros killed that way was far greater than the number of Negros killed in the actual war. Once we shed the emotional point of view, adopt scientific point of view, we allow Negros to return to nature and live in their natural habitats, and there is and will be no problem from the Negros.

Scientific point of view is the moral equivalent of war; they are equally fast in teaching peoples lessons.


Adopting the scientific point of view helps solve the problem of diseases also. For ages, and even now, common people think that diseases are caused by the Sin of man. But now, thanks to science, more people know that diseases are caused by the attack of foreign organisms known as microbes. By studying microbes with a scientific point of view, preventive medicines can be developed against diseases. The moral use of war is its teaching people lessons fast. Scientific point of view also teaches people lessons equally fast. That is why J.B.S.Haldane theorizes that scientific point of view is the moral equivalent of war. It teaches people lessons as fast as war. Knowledge of biological facts helps people prevent diseases. Diseases are manifestations of nature’s laws. By knowing about these laws, people can cure or prevent these diseases. The only problem remains is, people not being punctual and regular in administration of their prescribed medicines. Attitudes like this are such common that discovery of insulin has not helped reduce the death rate of diabetic patients in England and elsewhere, for medicines and their usage do not still have a scientific basis among people. It is a paradox that ‘the study of medicine, apart from its scientific basis, has created more neurotics than scientists,’ Haldane observes.

In spite of scientists and science reigning in this world for so many long years and teaching, many people still think that diseases are products of our sin.

Scientists and science have reigned in this world for so many long years but in spite of their teaching that diseases are manifestation of natural laws caused by microbial attacks, a considerable number of people still think that they are products of our sin. When Jesus Christ was asked why a man became blind, he answered: ‘Neither hath this man sinned nor his parents; but the works of God should be made manifest in him.” He considered it an opportunity to prove God’s manifestations and cured the blind by his simple touch. The scientists cure people with diseases, instead of accusing not only them but their ancestors through generations also of sinning. In this respect, a scientist’s view of diseases is not unlike the view held by Jesus Christ. Many of his followers but still hold to views which Jesus Christ opposed. They are not scientific but emotional in viewing many social and human issues such as remarriage and abortion. When diseases affect, some of them do not treat it scientifically but pray. Many more people hold to the view that diseases can be cured by returning to nature which is just another fallacy- we will die before we begin to get rectifying restoratives from nature. To live according to nature to escape from diseases also is quite meaningless because civilization, savagery, health and sickness are all part of nature. 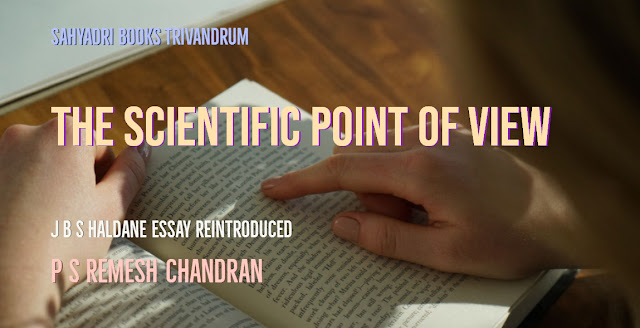 (Prepared as a lecture to literature students in 1990)

Editor of Sahyadri Books & Bloom Books, Trivandrum. Author of several books in English and in Malayalam. And also author of 'Swan, The Intelligent Picture Book'. Unmarried and single. Born and brought up in Nanniyode, a little village in the Sahya Mountain Valley in Kerala.

Posted by P.S.Remesh Chandran, Editor, Sahyadri Books And Bloom Books, Trivandrum. at 1:33 AM