014. Song Of The Wave. Kahlil Gibran. Recast In The True Poetic Form By P.S.Remesh Chandran

014.
Song Of The Wave. Kahlil Gibran. Recast In The True Poetic Form By P.S.Remesh Chandran 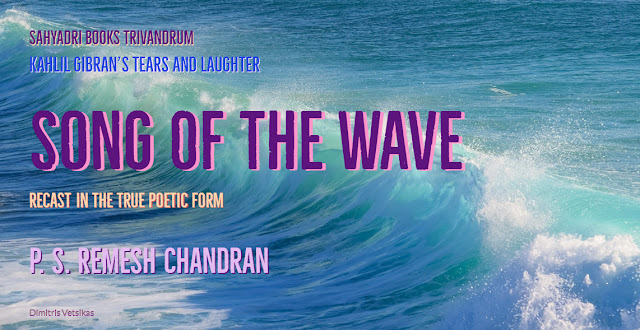 The sea, clouds and waves and the ever patient shore are a wonder to the new born babe, the steam engine like youth and the old man who is like a fading sunset. This energetic, thrilling, restless dame that is the ocean is shy and submissive to only one, her eternal and beloved lover, the shore. Their unending love story which has been going on and will continue to be so through the ages is presented here in the true poetic form.

Man brought back a piece of ocean with him which he still can hear in his blood and soul.
﻿


Standing on the shore seeing the perpetual mounting, rolling and thundering of the waves, one will wonder how much water is there on the ocean and if there is an opposite shore, how far and distant that would be. Sea-going boats men and yaughts men won't admit that their fascination for the sea would never be satiated. From time immemorial ocean waves lapping on the shore has been reminding man of the eternity of time and of the beautiful perceptions of its creator. Expanse of the ocean is the first thing that presented man with a glimpse of the immenseness of space and eternity of time. Since life forms migrated to shore from the ocean, man brought back a piece of ocean along with him which in still silent nights he can still listen to reverberating in his blood and soul.

It is easier to count the number of poets who did not write about the ocean.
﻿﻿


Sea shore and the ocean blue has always been an intriguing and mystic attraction to mankind. The poetical mind of the world gradually began to think of them as lovers, meeting kissing embracing and departing eternally, theirs being the most magnificent love story in the world. It is easier to count which poets did not retell this lovely love story than going after the countless number of poets who celebrated this ardence and affection of the ocean for the shore. Kahlil Gibran's Song Of The Wave surpasses every other one in it's unique poetic conceptions, beauty of diction and musical thrill. He wrote it in blank verse to mask his tune which Sahyadri Books & Bloom Books, Trivandrum recast in the true poetic form for all the world to sing. Song Of The Wave is included in his book Tears And Laughter. It is hoped that world music lovers and Kahlil Gibran fans in all continents will enjoy and benefit from being able to sing this song naturally for the first time. It is expected that beautiful orchestrations and musical albums and films of this immortal song will be made by those interested and talented. Readers, learners and researchers are advised to read Gibran's original blank verse as well.

Song Of The Wave from Tears and Laughter. The Poem Recast.

The strong shore is my beloved, and
I am his sweetheart, united we are at last
By love; and the moon draws me then from him,
I go to him in haste and depart
Reluctantly, with many little farewells.

I steal swiftly from behind the blue
Horizon, to cast the silver of my foam
Upon the gold of his sand;
And we blend in melted brilliance.

No love song equals the majesty and perfection of this scene.

﻿
I quench his thirst and submerge his heart,
He softens my voice and subdues my temper,
And then I recite the rule of love upon
His ears, and he embraces me longingly.

At eventide I sing to him the song
Of Hope, and then print kisses smooth upon
His face; I am swift and fearful but he
Is quiet patient and thoughtful. His
Broad bossom soothes my restlessness,
As the tide comes we caress each other;
When it withdraws I drop to his feet in prayer.

Lifted drowning souls and carried them tenderly to shore.
﻿
Many times have I danced around mermaids
As they rose from the depths,
And rested upon my crest to watch the stars;
Many times have I heard lovers complain
Of their smallness and I helped them to sigh.

Many times have I teased the great rocks
And fondled them with a smile, but never have I
Received laughter from them; many times
Have I lifted drowning souls and carried them
Tenderly to my beloved shore,
He gives them strength as he takes mine.

In the dead of night when all creatures seek slumber, I sit up singing.

﻿
Many times have I stolen gems from the depths
And presented them to my beloved shore,
He takes in silence but still I give
For he welcomes me ever.

In the heaviness of night when all
Creatures seek the ghost of slumber, I
Sit up singing at one time,
At another I am awake always.

Alas! Sleeplessness has weakened me!
But I am a lover and the truth of Love is strong;
I may weary but I shall never die. 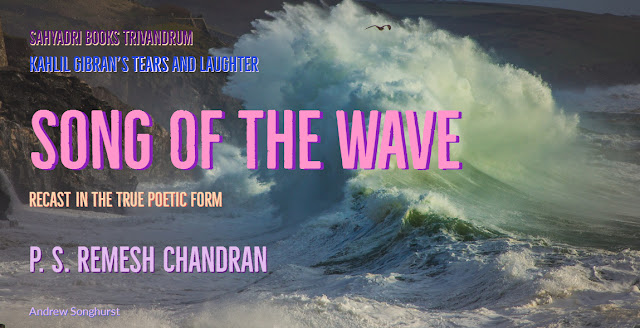 
The number of poets in all languages, lands and ages who wrote about the magnificence, might and beauty of the ocean are as many as there are stars in the universe. The primitive man sitting on the moonlit ocean shore under star studded skies might have been the first creator of a song. His exclamations in wonder at the series of meteorites and shooting stars raining on the blue expanse were the first poetry. No doubt Kahlil Gibran's mind synchronized with that lone singer's soul from an unthinkably far distant past. What love, caring and consideration were stored in the ocean's depths by the creator for man is beautifully conveyed verbatim by Gibran in the Song Of The Wave. The shore is none but man in a philosophical perspective. And the ocean, the creator's eternal inexhaustible kindness! 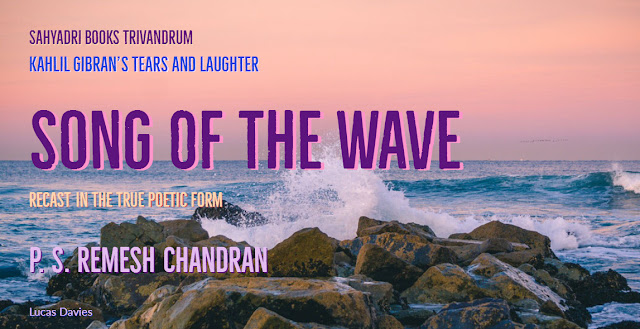 Meet the author
PSRemeshChandra
Editor of Sahyadri Books & Bloom Books, Trivandrum. Author of several books in English and in Malayalam. And also author of Swan : The Intelligent Picture Book.

This a lovely literary tribute to the true purpose of spiritual poetry. Marvelous appreciation and an excellent composition of an enchanting poem.

PSRemeshChandra.....I am glad to know that you are an editor and author as mentioned in your profile. If you consider it as answerable, i would like to know your age. I am a teenager and have high dreams. I would like to know how many years it took you to be where you are today.

Posted by P.S.Remesh Chandran, Editor, Sahyadri Books And Bloom Books, Trivandrum. at 6:34 AM

Labels: Song Of The Wave- A Poem-Recast from Kahlil Gibran.