037. How Many Handwritings Can You Have? Picture Essay By P S Remesh Chandran

How Many Handwritings Can You Have? Picture Essay By P S Remesh Chandran 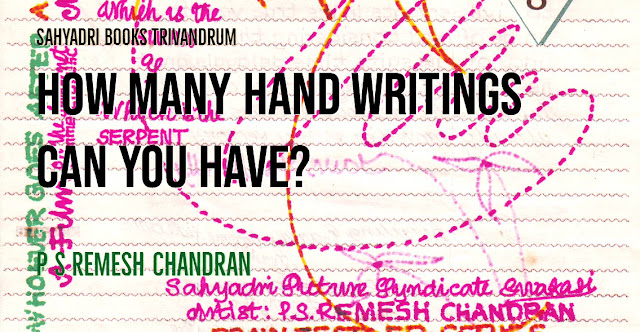 When a person writes or draws, thought from his brain flows through his hands and fingers and spreads on the paper. Just as face is the index of feelings, handwriting is an index of habits as well as of character. Character of the person can be analyzed from his works on paper. Sometimes lines and words will supplement each other and special sense will be needed to assess such creations. A few hand made specimens from the Editor of Sahyadri Books & Bloom Books, Trivandrum are included here.

Windows into the character and history of a person which is  open book in his native land.

The few hand crafted documents here include cartoons, posters and poems prepared during the past years by the author for various purposes. They are not meant as literary creations but just as specimens of the Editor’s handwriting. They are intended to serve as windows into the character and history of the person concerned which is anyway an open book in his native land. Anyone who has a rudimentary skill in hand writing analyzing can read them well and evaluate the editor. Since photos of the Editor are unable to be made available, this is supposed to be a clear-cut way to familiarize with the Editor.


The famous Love Songs Of Tagore translated into English from Bengali and recast in the true poetic form.

The musician in Tagore created so many beautiful songs in Bengali language but this gifted writer never bothered to write them either in English or to translate them. A few songs which already had been translated into English by Mr. Rabindranath Chowdhury were in prose though beautiful. A few of them were recast in the true poetic form by the Editor of Sahyadri Books & Bloom Books, Trivandrum. The most beautiful among them was Udbodhan, meaning Awakening in English. The above picture was created as a cover for this proposed book, 'The Love Songs Of Tagore.'


Lines and words may supplement each other.


Lines and words supplement each other and sometimes common sense enough would be needed to see through and understand the overall meaning and message of such combinations. Sahyadri Books & Bloom Books has put together a book including a hundred of such creations. It is titled 'Swan, The Intelligent Picture Book', a collection of single line drawings meant as a Brain Testner Series, assumed to be the first of its kind in the world. Pictures like these are meant as specimens to test a person to see how many things he can see at a glance. In whichever way the letters are styled or positioned, there certainly are quite a number of persons who can read everything within seconds.


Therefore I will sing at your door step, director.


Here is a Malayalam song, depicting the leisurely life in contemporary government service. Names of any persons, places or references to any incidents are purely fictitious, originated from the pure imagination of the author. They have no connection with any real incidents, characters or persons living or dead. This song is from the Malayalam musical album ‘The Hospital Window.’

A hand crafted song for a Malayalam Musical Album.

And here is another Malayalam song from another imaginary arena. Names of any persons, places or references to any incidents are purely fictitious. They are in no way connected to any real incidents, places or persons. If somebody finds any such allusion it is only incidental.

How can you analyze the hand writing of a person if he has many?


Sometimes dozens of styles of hand writings can be and may be used in a single article. The above is a portion from such an article, actually a complaint, which was never used.

Pictures can cross barriers of nations and languages easily.


Do not take the things seen in these pages seriously. They are just meant to be laughed at and laughed about, to ease mind at times of distress and disinterest. They are used to serve as light diversions to serious literary criticisms published at this venue. A picture can suggest multiple things, often contrasting, sometimes absurd and at times thought-provoking. Pictures cross the barriers of nations and languages easily and do not need interpreters generally. Moreover they are the pleasantest form of recording history.

Corruption, and bribery: the Asian lubricant.


Many years back a book titled ‘Corruption In India’ was published in which Bribery was described as the ‘Asian Lubricant.’ As years went by, quality and integrity of officers recruited into government service began to deteriorate considerably and government finally became quite incapable of making corruption impossible. In fact, more and more top-level government personnel, political power heads and bureaucratic echelons began to be put in prisons for corruption. Now it is even considered making some illegal income in addition to salaries is respectable. Those government officers who are committed to people and who keep back from involving in any kind of corruption are hunted by government and their subordinates like dogs in the manger. When politicians suddenly turn attention to a government institution, everyone now knows that great money is coming to that institution for some scheme. There are thousands of such examples in the government sector, a few of them horrible. Those who steal hundred thousands from public treasury are openly promoted as officers and those who remain loyal to principles are trampled down like worms.

It is only flies and bees that are entangled in the net of law. If an elephant falls on the net, it will go down with the net.

Central governments in the Asian countries spend millions of public money on good schemes but the life of poor people in the states remains still miserable. Even when great scams and thefts are brought to day light by central investigation agencies and auditing agencies, the money lost is never recovered. It was recently estimated that petrol could be sold in India for 20 Rupees with the money involved in a single scam. A simple person who stands watching this for decades will be forced to tell things and that is what the person in the book 'The Hospital Window' does. He is casually lying in a hospital bed observing things there. It is when we have no money in our pockets that diseases come to us. And that is when we see the horrible face of bribery. And that is exactly when we wish to shatter and break this citadel of wrong doings.

Some films will never reach the silver screen.

Some films will never reach the silver screen for various reasons; the real story of why they did not reach the screen would most often be more thrilling than the actual story of the film. These two film posters and a few songs are what remain of such an unproduced film.
Jalaja Padma Raaji means A collection of water-born lotus or The Lotus Band.

Jalaja, Padma and Raaji are Malayalam girls' names. Jalaja means 'water born'. Padma means 'the lotus'. Raaji means 'a collection'. But 'Jalaja Padma Raaji' combined in Sanskrit means 'a collection of water born lotus' or 'The Lotus Band'. When the name of this film was conceived someone asked who these Jalaja, Padma and Raaji are and whether they were acting. The story of the book was brought out as a book in English as The Lotus Band and the songs were included in a musical album.

This picture is a page from 'Swan, The Intelligent Picture Book' which is a collection of similar simple single-line drawings. The viewer is asked to identify which is the Question mark, which is the Ohm and which is the Placenta and is expected to answer within a reasonable time.

What is the charge for publishing this advertisement?


The above is a letter to a newspaper requesting to publish an advertisement. The line in Malayalam means: 'A beautiful advertisement. What is the charge for this advertisement may please be intimated to the address mentioned'.

So, don't take things seriously and laugh if you can.

So, perhaps you might have thought that the above pictures, posters and poems might be something into which have went some serious thoughts. Please don’t be misled. They are products from a kindergarten.

This page will continue through other little hand made articles. 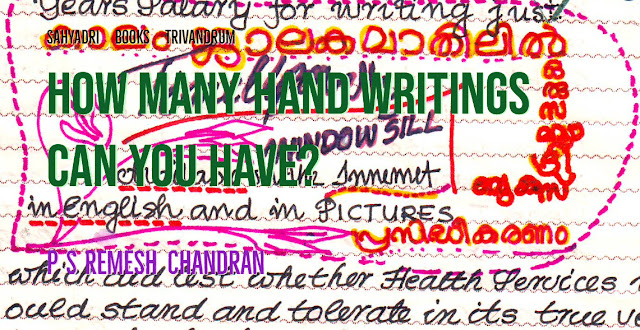 Posted by P.S.Remesh Chandran, Editor, Sahyadri Books And Bloom Books, Trivandrum. at 10:37 AM