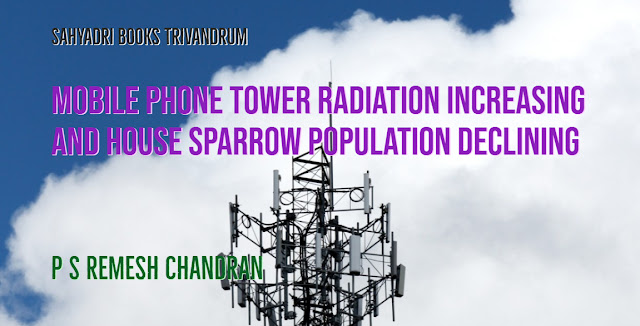 
The most conspicuous reason for the house sparrow and tree sparrow population dwindling in modern day India is radiation from mobile phone towers. Assam Agricultural University found that house sparrows survive more from tower radiation than tree sparrows in Guwahati. It only proves that house sparrows living in more protected environments than tree sparrows are less affected than tree sparrows that live in the open. They all are being eliminated en mass and is becoming a nearly extinct species anyway. Excessive use of pesticides by man and his constructing houses with practically no nesting places for birds nowadays only add to worsening of the situation. It is accepted knowledge that radiation and vibration from mobile phone handsets and mobile phone towers is not tonic to animal body and birds but a hazardous necessary evil, for the time being. It is inconceivable that authorities believe radiations from Mobile Phone Towers do not affect human and avian health and well-being. Even if we are sitting inside a rocky cave surrounded on all sides by dense forest or are lying hidden inside a rocky pit in the deep and unfathomable bowels of the Earth, our mobile phones still would have range and we can still send messages and receive messages, which means the atmosphere around us and our surrounding air is saturated with radiations and unperceivable vibrations. It is known all over the world, even to tiny school children, that our little mobile handsets are much harmful to human body than the large television sets. Who will deny that saturated presence of unnatural radiations is harmful to human body? At times, authorities including the union minister for communication will issue press releases, assuring that every step is taken to prevent excessive radiation from mobile phone towers. But what steps are they taking or can they take, apart from dismantling towers and resorting to other costlier communication technologies? At times they will say that some kind of directives has been issued to limit radiation to harmless levels. What harmless levels, undefined and ambiguous? Are these directives being kept and observed by the tele-communication department? And the sound pollution caused by these omnipresent mobile phone towers! Almost all of them have diesel generators attached to them to substitute electrical power when electricity fails, which almost always does. Never seen or heard about a costly noise-proof generator attached to a mobile phone tower in India. Noise-proof generators are must for all mobile phone towers, but except just a few here and there, almost all of those towers use diesel generators. No lawyer has ever approached a court nor has a judicial court ever issued an order prohibiting the use of diesel generators. So now, all over India, we have freely-functioning mobile phone towers, transmitting as much communication and radiation as they can, and affecting the health and life our children, pregnant women, ailing old men, avian beings and livestock. Occasionally, a few research organizations, funded by government which in its turn is funded by BSNL, Airtel, Tata and Reliance, would conduct some divertive studies and declare that they have found beyond doubt that mobile phone towers causing hazardous radiation on humans and birds is a baseless allegation.

It is inconceivable that radiations from Mobile Phone Towers do not affect human health and well-being. Even if we are inside a rocky cave surrounded by dense vegetation or hidden inside a rocky pit in the bowels of the Earth, our mobile phones have range which means the atmosphere and our surroundings are saturated with radiations and unperceivable vibrations. It is known all over the world even to tiny children that our little mobile phone handsets are much harmful to human body. Who will deny saturated presence of unnatural radiations is harmful anyway to human body? Are the directives being kept and observed? And the sound pollution caused by this omnipresent mobile phone towers-almost all of them has diesel generators attached to them to substitute for electrical power. Never seen or heard about a costly noise-proof generator attached to a mobile phone tower. It is easy and cozy for those who live in sound-proofed Government-paid air-conditioned houses to turn faces away from urban and rural realities. 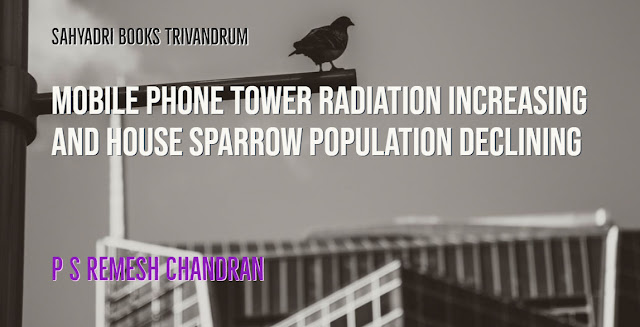 Posted by P.S.Remesh Chandran, Editor, Sahyadri Books And Bloom Books, Trivandrum. at 5:03 AM