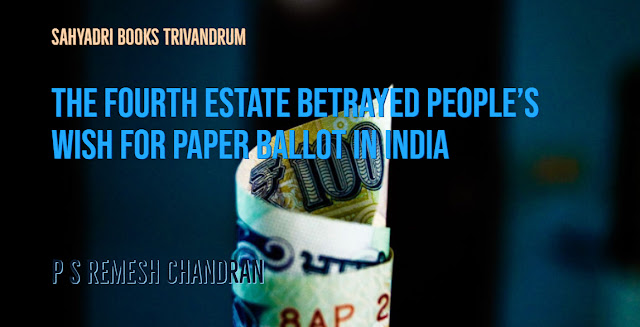 
Had the Fourth Estate, i.e., the newspapers and the television media of India, been true and committed to people and served their purpose, replacing paper ballot with suspect electronic voting machines would not have been possible in India. The people would have been made alert enough to recognize the dangers they pose. If people do not vote, whose vote will the voting machines manipulate? That was the remedy but the Fourth Estate skillfully prevented this from happening. They were always after government advertisements and concessions. So they turned their faces away from the obvious. So the people got a government which is now being accused of formed by rigging elections through networks masterminding electronic voting machines.

Now the Fifth Estate, i.e., the people, recognized this betrayal by the Fourth Estate and is independently raising this issue of bringing back ballot papers. It is people, and not companies, organizations or political parties, who are writing directly in social media like Face Book, Twitter and Linked In demanding the reinstatement of ballot paper. They have begun to speak directly, without the help of the Fourth Estate. Till this parliament election in India in 2019, we did not see this much posts, articles and news demanding the reinstatement of ballot paper. Isn’t it the rise of people against voting machines? If it isn’t the rise of people, then what is?

Of a hundred people who express and record their opinions and views in Face Book and other social media, how many write in support of voting machines and how many demand the bringing back of ballot papers? See the difference in the educational and social awareness levels of these people who are in favour and who are against voting machines, and also see the language each uses. It’s self explanatory. The Fifth Estate is expressing their opinions independent of the untrustworthy newspapers and television media and becoming powerful each day, with each issue, sending their message to more people, however hard the print and visual media try to reverse this trend. People do not need the betraying Fourth Estate of India anymore to express their opinions. They have other more efficient platforms. 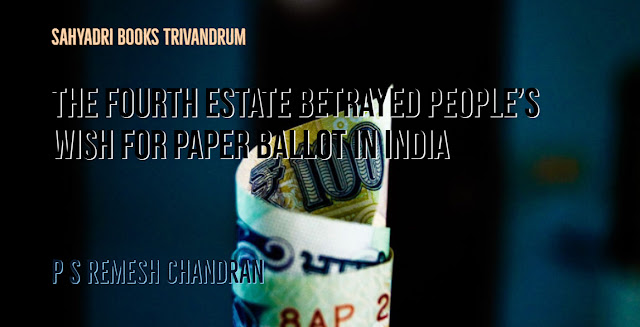 Posted by P.S.Remesh Chandran, Editor, Sahyadri Books And Bloom Books, Trivandrum. at 3:50 AM