151. By talking too much of Hinduism are we not voicing the dead and resurrecting them from past to bring our early fall? P S Remesh Chandran

By talking too much of Hinduism are we not voicing the dead and resurrecting them from past to bring our early fall? 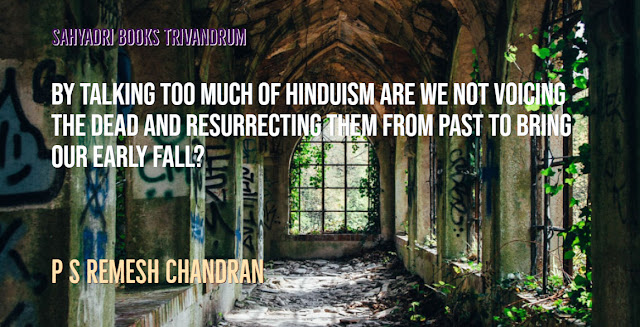 There are many things in Hinduism which the world has not been able to understand. Even the very learned and trained Hindus in India have not been able to understand them. What the world considers strange and not understandable and explainable it generally calls mystic or even occult. But these things in Hinduism which are under reference here are not simply mystic or occult. For the past several years many of India’s national leaders- I mean not Congress leaders or Communist leaders- speak a lot about ancient Hindu texts- about how they should be considered as pure science, how they should be revered as divine texts, and why whatever said in them should be adhered to verbatim and practiced in an Indian’s, especially a Hindu’s daily life. In short, this thing has become Indians', Indian media's and not a few foreign media's daily bread thanks to many national leaders.

We know these texts were written by, recorded by, or revealed by ancient maharshis, rishis, sanyaasins, saints, yogis and people like them, who were neither gentle nor kindly in their lives. They took a very hard stance against mislearning and poor learning and their punishments were very hard- unthinkable to people living in a modern world- and meted out very quickly even before the victims knew what hit them. There are thousands of examples and illustrations for this in these ancient Hindu texts which we hear quoted everyday in India and abroad. Their authors lived frugally, even ate scantily, and tolerated haughtiness, opulence and vanity even from kings never. When we talk a lot about Hinduism for years and actually make it our career, we are not actually inventing new things or adding our own genuine thoughts, but just repeating thousands of times what these people wrote or thought centuries back, unless we are original Hindu thinkers and scholars like Dr. S. Radhakrishnan. So, are we not giving voice to the dead and resurrecting them to bring our early fall, if what these national leaders say about Hinduism is true? 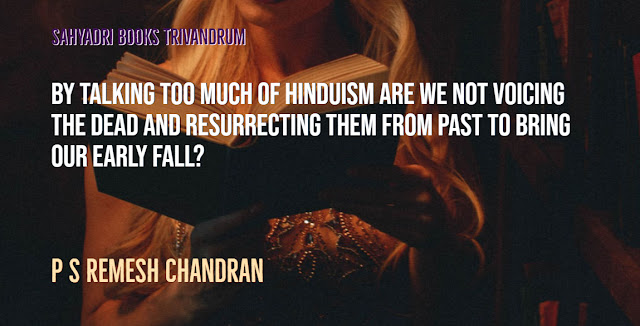 I actually did not wish to bring this subject up. But a BJP MP through her SOS message to the world did. So, now it is news and a topic of debate. In mid August 2019, Pragya Singh Thakur, a Member of the Parliament of India from the Bhopal constituency in Madhya Pradesh and belonging to the ruling Hindu party, Bharatiya Janata Party and the Rashtriya Swayamsevak Sangh, publicly announced that the passing away of several BJP leaders was due to sorcery (black magic) by opposition parties! May be or may be not. If it was sorcery, it was certainly not by opposition parties. The only political party which feasts upon superstitions in India is the BJP which abounds in fakirs with not a stitch on who are well-versed practitioners of sorcery. So, her statement was an SOS to the world actually, to save her life from her party’s superstitious which is not uncommon in politics and among thugs to exterminate each other to reduce numbers when the prize is very near. Knowing it dangerous to raise allegations against her own party, she must have reversed things and given an SOS message to the world which is exactly what anyone intelligent would do for safety. Though the BJP leadership was embarrassed and gagged her for ever, the fact remains. Did she mention an outside or inside job actually? Or…. were they all at last falling victims to what they had been professing in India and abroad for long?

If we believe in Hinduism, we are also obliged to believe in resurrection also as a rule. We cannot say I believe in Hinduism but I do not believe in resurrection. Hinduism is not part and parcel but a package. According to Hindu texts the dead are not the mere dead and gone, but the dead and resting, waiting to be called, and ready to resurrect. We call them, they come. It is that simple. After we have called and they have come, we cannot say they were not needed that immediately and so should return, or say ‘today I have no time, so please come another day or wait till I return from New York’. They are not that type of people to play with and annoy. Even forgetting to show respect for a single moment while they are in our presence which we took to switch-off a TV or switch-on a mobile phone may become mortal and end our lives. They are not from an age of TVs and mobile phones and are not familiar with such jet age and digital age accoutrements or accustomed to tutelage the careless and irreverent people who fly from city to city and from country to country without time in their tight schedules to spare for a saint from the past, presently. They will not ask us explanations or clarifications. Suppose it is Viswaamithra or even Durwasa whom we summoned without clearly learning or knowing about them. So, our life ends there. Actually that is what they are there for- to take away life from the unthoughtful and the heedless who are but still wicked enough to beckon and call to his or her majestic presence a saint from his dead past and also his peaceful rest. 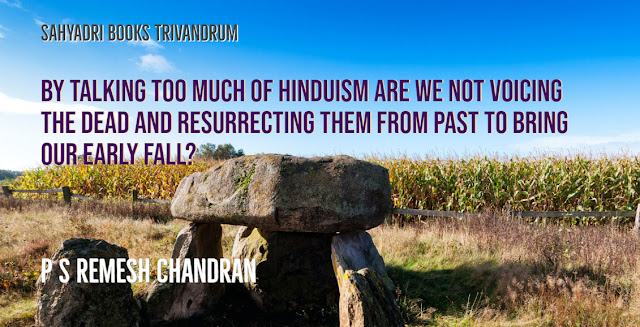 Only very diligent and attentive people with plenty of time on their hands to play host shall call sages from the past through constantly repeating their texts. The world has the immortal story of Shakunatala and Maharshi Durwasa before it as an example of what may happen if not. The famous Sanskrit work Shakuntalam by the ancient poet Kalidasa is the story of how the Ashram virgin Shakuntala immersed deep in her lover’s memories forgot to rise when Maharshi Durwasa- the angriest and the most quick tempered among all Maharshis- came announced to her ashram to visit her father, how he cursed her for her irreverence and non-vigilance that whoever she was thinking about at that moment would forget her for ever! It is believed that they never reunited. Even Shakuntala’s birth was an example of how stern and even irrationally unforgiving these sages who created the ancient Hindu texts could be. She was the daughter of another equally head-strong sage, Maharshi Viswaamitra, and the celestial apsaras Menaka. It was a trap from heaven, so Viswaamitra refused to accept the child. He never relented. Shakuntala was adopted by another Maharshi who found the baby lying in a forest.

Once they are called and they have come, these sages will not return before fulfilling their mission, before going back to rest and wait for the next call to come from another foolish generation. They know in advance when and where they would be called, by whom, and for what. But they come to execute what they are destined and programmed to do, not what the summoner intends to use them to do, for their scheme is to make slight adjustments to time to prevent something from happening or make something to happen in future. That is the scheme and plan of things which the puny little caller understands not. We cannot blame them because they also did put in place a unique safety mechanism to these ancient texts specifically marked as sacred by the wise to prevent such self-suicidal calls from the future. They wrote their texts almost all in Sanskrit and instructed that only Brahmins should be permitted to read them or even go near them. No one asked the modern day politician who is unlearnèd and not well-versed in Sanskrit to read them and quote them liberally on platforms foreign and native without stop, finally becoming unable to stop at all. Actually that is the punishment devised in ancient Hindu texts for the unlearnèd mortal man: making him or her finally becoming not being able to recognize who is actually speaking- us or they. They begin to hear voices in their brains which are not there but which they think are there. They think and believe that they are spoken to, so they obey verbatim. So, that explains their many irrational acts. What else will they do? What else can they do, once under the majestic spell of the ancient sacred Hindu texts they have been professing loudly, proudly, for long? Did they actually were thinking it is a joke and those texts have no power to subjugate people? 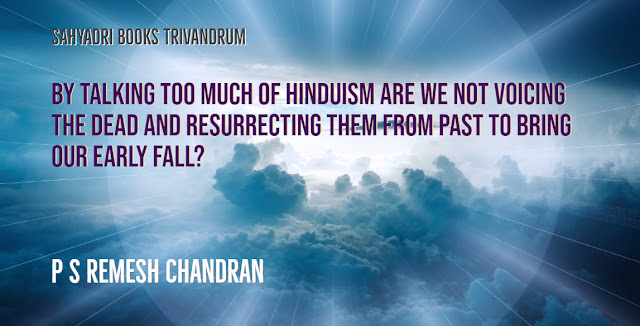 Their actions and speeches gradually become quite irrational or even extrovertous and people will begin to note but they themselves will not recognize this change. They become a problem for their close security personnel and what these personnel have to say will not be recordable under any circumstances or most often, unless someone opens their mouth after their retirement years after as almost all of them would be very young. At this stage they are still earnestly trying to lead a double life, living a dual personality as best as they could try, trying to live like what they were once and also like what they are now. Finally they give up. It is called brain fever in mild terms. It is at this stage that we hear a rumour that our person is ‘planning to visit New York for many important things’. Clinically trained physicians and psychiatrists have other names for this state but I refrain from using them because getting into this state is not a crime of anyone but an accident- here a self-invited accident. From then onwards most of their actions and speeches become explainable, and pardonable. But the horrendousness of the thing is that if they were one of the decision-makers of the nation, any of their actions may have gone disastrous already. That is why ancient sacred Hindu texts have the warning words ‘ancient’, ‘sacred’, ‘Hindu’ and ‘texts’! They are not for the unlearnèd, the impatient, the hasty and the undiligent.


You may think all these are absurd, irrational, illogical and bizarre. May be, but then that is what the present Indian national Hindu leaders are teaching people in India and abroad. If they say they actually believe what they say, then they are already under a spell. If they say they do not actually believe what they say, then they are farce. Why this did not become a topic for international discussion till now was because it is the first time the ruling party of a country- India- asks people to go back to ‘ancient sacred Hindu texts’. 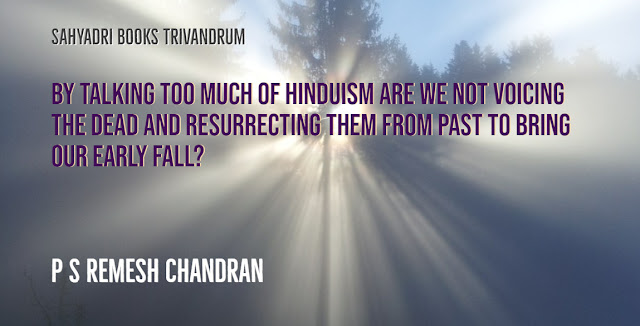 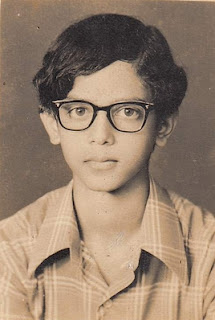